A Success Story by Shannon Sustacha

I WAS GIVEN THE OPPORTUNITY TO TRY SYNERGY COMPETE SUPPLEMENTS AS A TRIAL DURING THE SPRING/SUMMER OF 2005. I STARTED BOTH OF MY BARREL RACING HORSES ON THE FORMULAS IMMEDIATELY, FEEDING AS DIRECTED BY ITS CREATOR. 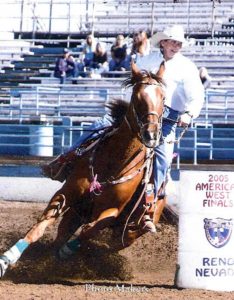 Horse #1 – 8 year old Appendix Quarter Horse mare – CC Peables (Bargain) Bargain took right to the new supplement without any hesitation in consuming all of her grain I had mixed it with. (Nutrena Safe choice) Within 2 weeks I was rather startled to notice a visible bloom in her coat. I had thought she was getting everything she needed in the nutrition department, however the new supplement program provided me wrong. The next visit by my farrier provided even more evidence of changes at the cellular level. She has always had shelly, brittle, thin walled hooves – no matter what I was doing, giving her or painting on her hooves, they stayed thin, thus she was prone to loose shoes, sand cracks and lameness issues associated with that problem.

She had been taking Synergy Compete for about 6 weeks when she was due for a visit from the farrier. After he had pulled her old shoes and dressing the foot for the new shoe, he wanted to know what have you been doing with her. He commented her feet are WAY better than last time (6 weeks earlier). He went on to say the walls appeared to be thicker and there were no chunks or cracks in her feet, something that had not been present in the 3 years prior. It s been approximately 8 months now since I started her on the supplement and her feet are stronger and healthier than ever. While it s winter now and she is hairy, it is very noticeable that she has not fallen off in body condition during the long cold months, something she has always done in the past. She has also not developed any diarrhea this winter something else she was also prone to do – something my equine vet labeled as winter stresses on her body.

The last part of this trial certainly deals with Bargain s overall attitude and composure. She is a flighty, sensitive type of horse who in the past has been a handful to train, compete and win on. While she has always that the natural talent necessary to excel in the tough world of barrel racing, she has always been relatively fragile minded who seemed to let the smallest issues completely take away her concentration and focus. Enter Synergy Compete. Since Bargain has been on the program she is absolutely more focused on whatever I m asking of her – whether it s to make a run in an arena or move cows all day on the ranch, she has yet to have any of her typical melt downs, which I ve always compared to a small child throwing a temper tantrum. I don t want to – and you can t make me, or you aren t the boss of me type of thing.

This past summer saw our fastest times & best success to date in the barrel racing arena, giving us both the confidence we need to continue improving and giving me the chance to just let her work and be completely on her honor. Just that feeling alone – without any of the other improvements I ve addresses have made me a complete believer in Synergy Compete and what it is capable of with regards to the performance and overall health and wealth of my equine partners.

Horse #2 – Signs Chick Daubie – 6-year-old Appendix Quarter Horse gelding. I got Daubie when he was a gangly 3-year-old. He had been started under saddle and it was my intention to take his training further and aim him towards a futurity barrel-racing season as a 5-year-old. One of our biggest obstacles was his seemingly inability to put on and keep on weight. He was skinny and I worried all the time about hurting him while in hard training. I had his blood work done by my equine vet and was told he wasn t really lacking in anything, and his recommendation was to just pour the feed to him (which I had been doing) and he should pick up. Along with his poor weight, his hair was somewhat course and he definitely didn t have the gleam in his eye that I look for in all my horses, whether they are performance horses, ranch horses or retired partners.

I started Daubie on Synergy Compete in June 2005. He took right to eating it and I never had a problem with him consuming everything I put in front of him. It was several weeks later that I really thought I noticed a change in his body condition and it wasn t until I hauled him to a race that other people who had been watching us during our journey, remarked how much better he looked to them. It was also about this time that he was noticeably less tense while under saddle. He was usually pretty compliant (he does have his moments however) but he seemed really get it which did happen about the same time he had been on Synergy for 3 or so months. He was running harder, turning sharper and recovering very, very quickly. I was also using him on the ranch and he was really covering the ground effortlessly and literally could go all day with no trouble at all.

I had a bad riding accident while competing on Daubie at a race in Farmington Utah in April. I ended up going off over his head and into a concrete wall and instead of stampeding all over the arena like most horses do, Daubie stood completely still, stayed close to me and waited for help to arrive. He was the talk of the race the next day, because folks could not believe he was as calm as he was after the wreck. Gone was the flighty, reactive horse that had been previous to this accident always looking to get away from any type of pressure or excitement.

The biggest wow moment for me came during a Shirley Ankrum barrel clinic I attend every year in Utah. I had actually hosted a Shirley clinic here in Elko in March of the same year and she voiced a concern about how skinny Daubie was during that clinic, although he was working well and doing everything that was being asked of him. Upon my arrival at the Utah clinic and after tying my horses to the trailer, Shirley came over to say hello and instead she stood completely still, slacked jawed just staring at Daubie. She asked is that the same gelding? I told her it was and she was literally speechless at the change in his appearance. He was no longer skinny, in fact he was bursting out of his own skin with health, his eyes were shiny and bright, his mane was thick, down past his shoulder and his luscious tail was dragging on the ground. His once lackluster coat was shiny and honestly gleamed in the sun. All that was second though to his overall body condition which had gone from skinny, showing ribs, back and hip bones to a horse whose frame was now well covered with flesh and whose muscles couldn t have been more pronounced if he had been posing for that moment. And of course he thinks he is all that , while being a joy to ride and compete on. He runs every run with his heart and tries as hard as he is physically possible of doing. I excited about our barrel-racing career together – if I can actually stay on him.

I had not changed his feeding program, with the exception of adding Nutrena Safe Choice and starting him on Synergy Compete as directed. These were not overnight changes; they did take time to happen; however my biggest astonishment was that they did indeed happen. I ve used other products and have never been as satisfied with the results of any of them as I am with Synergy. I will continue using it, and I don’t hesitate recommending it to all my horse friends and fellow competitors. 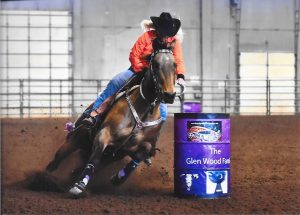 We accept these cards with PayPal

Drop us a line!

If you have any questions about our products please contact us and we are happy to oblige! We've been on the market for 10 years and customer service is our special forte.